In our second edition of the exhibition „FAB Dimensional“ once again we ́ll showcase animation art outside the cinema, beyond the clearly limited and familiar frame of a linear film. The medium of animated film in the production process and in its approach per se offers many intersec tions to other artistic media such as sculpture, game or installation. This year‘s exhibition shows five artistic positions that, in very different approaches, make animation experienceable in space, invites to interact and to be amazed.

In the wonderful rooms of Verwalterhaus we will open an animation cosmos for eight days, which promises a change from the film program of the festival and the noise of the big city! 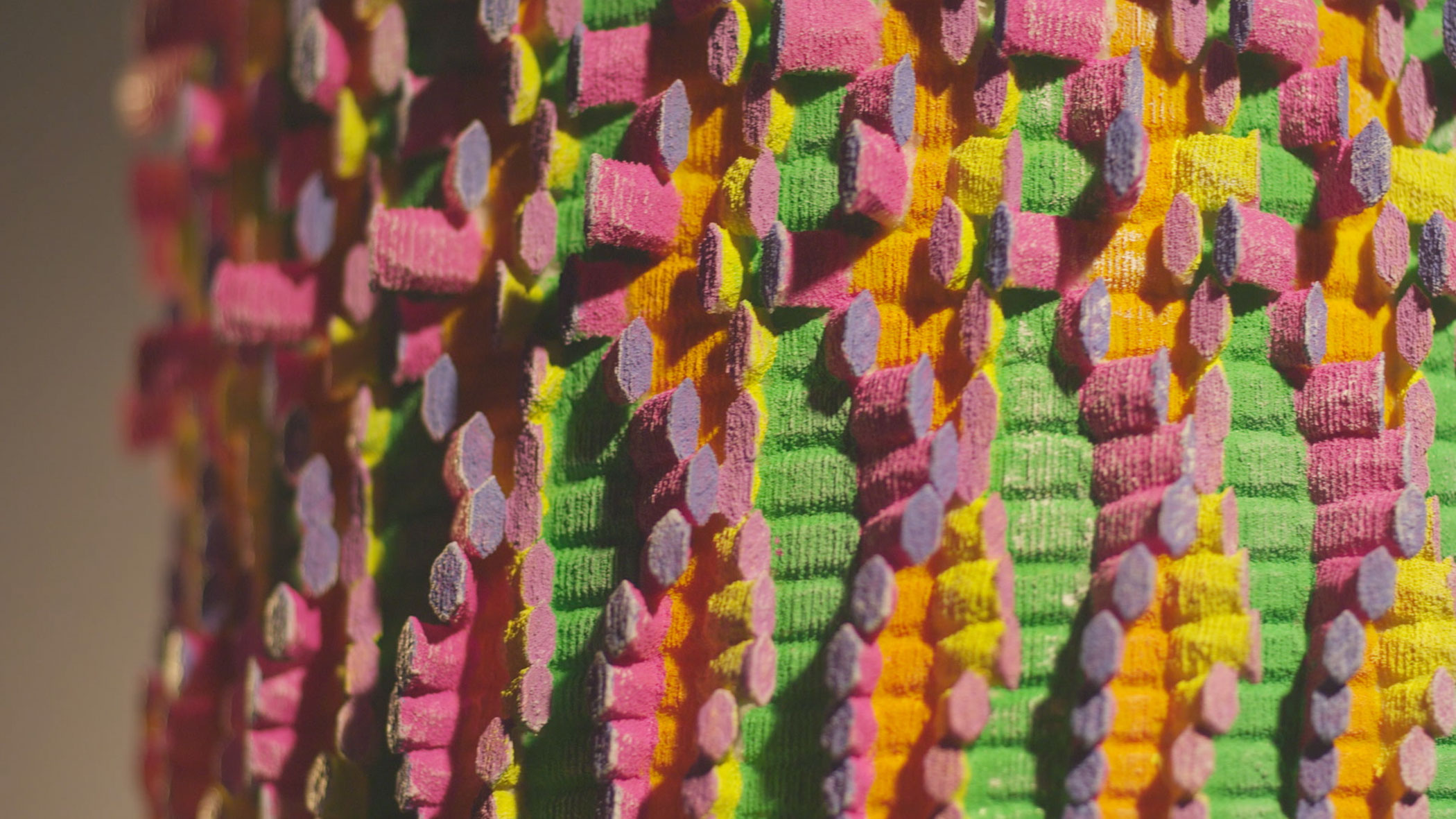 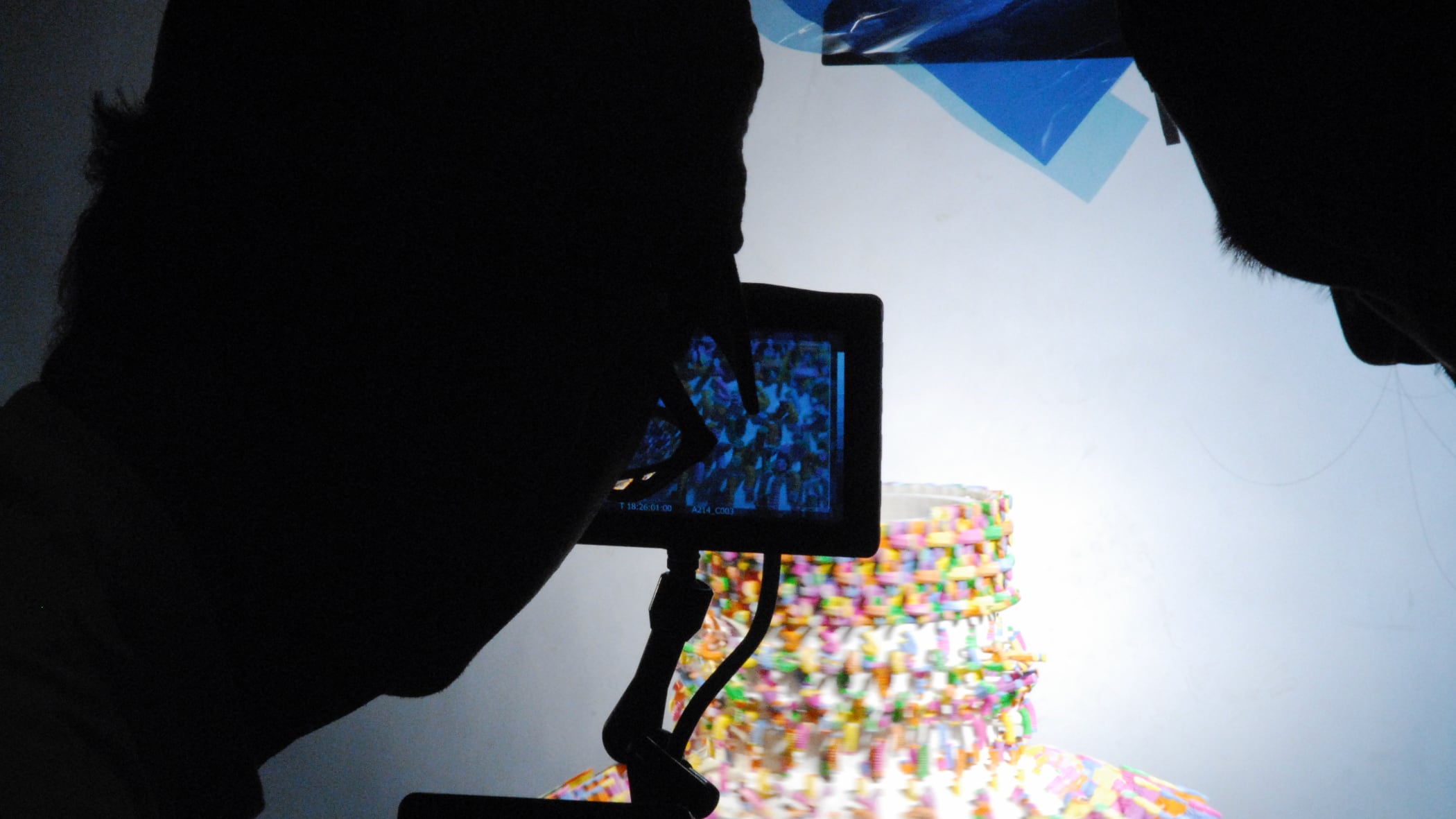 As a subcategory of the „concrete animation“ coined by George Griffin, Eric Dyer calls his art „zoetropic art“. For him this art provides creative possibilities that are yet to be explored.


Like in previous projects, the artist Eric Dyer unites various techniques of animation film art in his work „The Bellows March“. On the one hand, he uses the zoetrope, one of the oldest moving image devices, as the basic structure. Each zoetrope sculpture consists of different types of miniature accordions.
Some sculptures look like a mountain with a number of small instruments spread all over. On the other hand, he uses digital cinematography and modern 3D printing. The animation was generated on the computer, then the the sculptures were 3D printed and painted hand. This is how he brings his art from the digital to the physical world.
On display are two of his sculptures and their different ways of creating the illusion of moving images.


On the one hand, visitors initially experience the sculpture as a dynamically animated scene in the form of a projected film. The work takes on its initial, sculptural form in stroboscopic light only as the exhibition progresses. Here, the three-dimensional sculpture takes center stage as a piece of art. The audience can – in a double sense – go back to the origin of the moving images.


At last the “live” experience of rotating zoetropes behind the scenes together with their animation results on screen, creates a bridge between static and animated art.

This style combines the past, present and future. A kind of cycle arises. This transfers to his storytelling. Against the backdrop of the second Gulf War, the scenes are put together to form a seemingly never-ending cycle of life, death and rebirth. 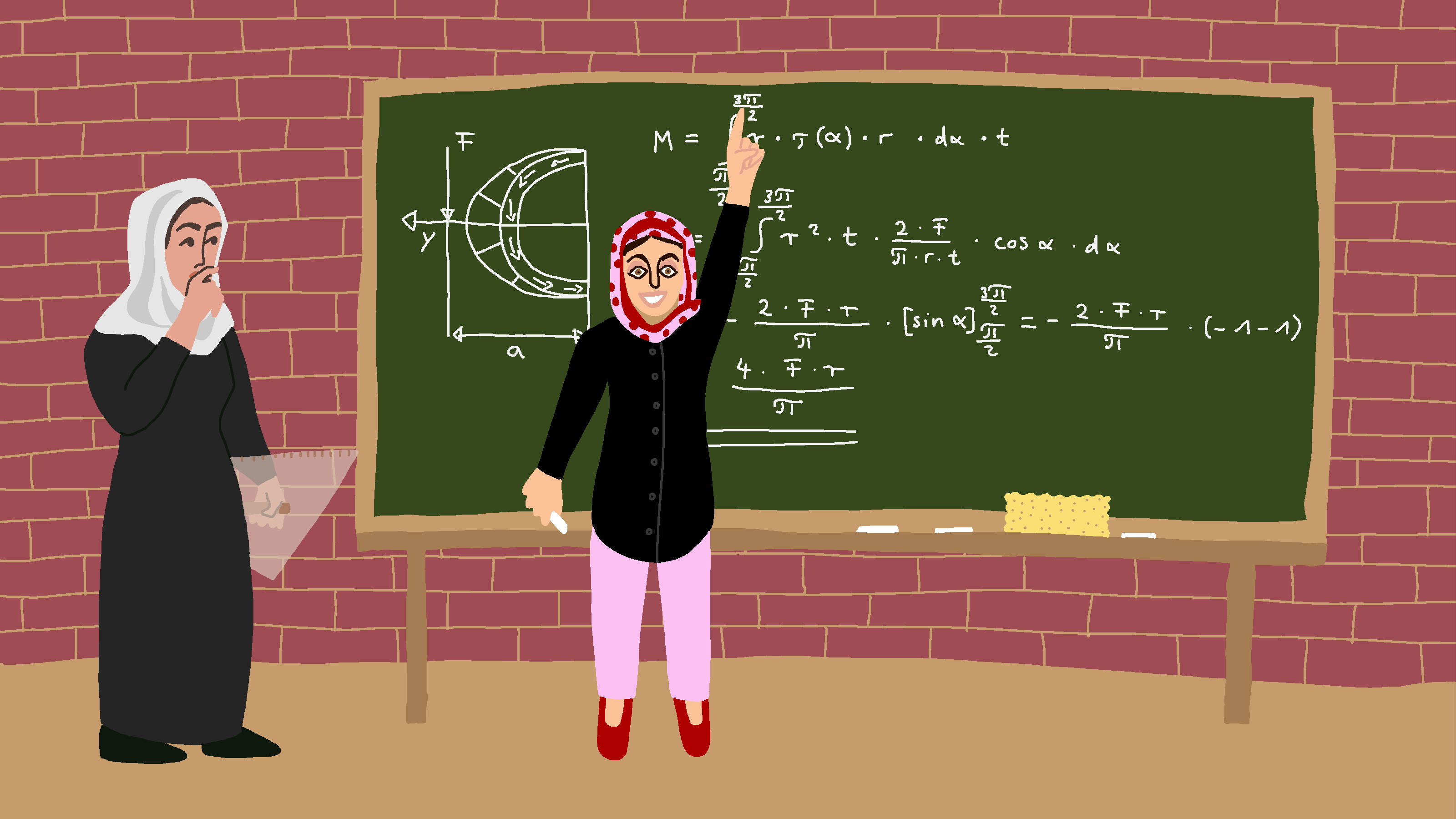 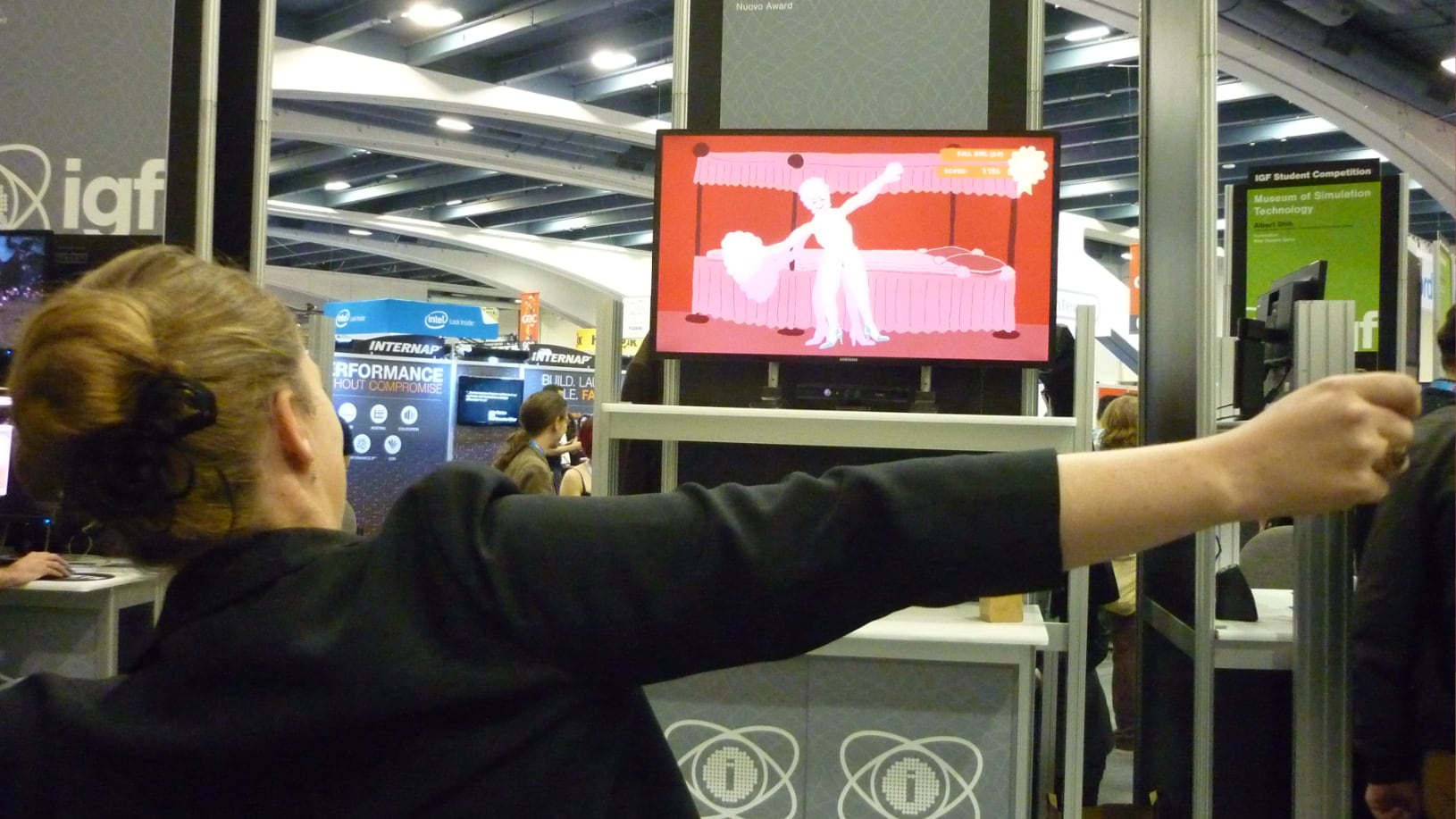 What does it take to become a Perfect Woman? In Lea Schönfelder and Peter Lu’s game, the players strive for perfection and bend over backwards in order to fulfill various – playfully exaggerated – female role models.


The metaphor is being taken literally in this case: the players’ actual movements are being captured by a Kinect camera and synchronized with prearranged poses on the screen. A choreography is created by the players’ bending and contorting in the attempt to copy the perfect model – the ideal mother, the exotic call girl, the successful foreign minister, or the professor.


Starting with the depiction of an embryo in the womb, the game presents the various stages of a woman’s life on seven different levels and offers the players a choice of roles to play at the beginning of each phase. That is how the players assemble their lives and create a perfect biography. […] And despite the fact that the game focuses exclusively on female roles, this struggle of perfection is not limited to women. The game addresses social stereotypes as well as identity and gender constructs in general. Men are surrounded just as much as women by idealized role models that they are told to fulfill. „Perfect Woman“ was inspired by Lea Schönfelder’s life situation during her residency at the UCLA Game Lab in Los Angeles. This also uses some of the questionnaires from women’s magazines as a template – „Are you the perfect mother?“ or „Are you good in bed?“ as a template. 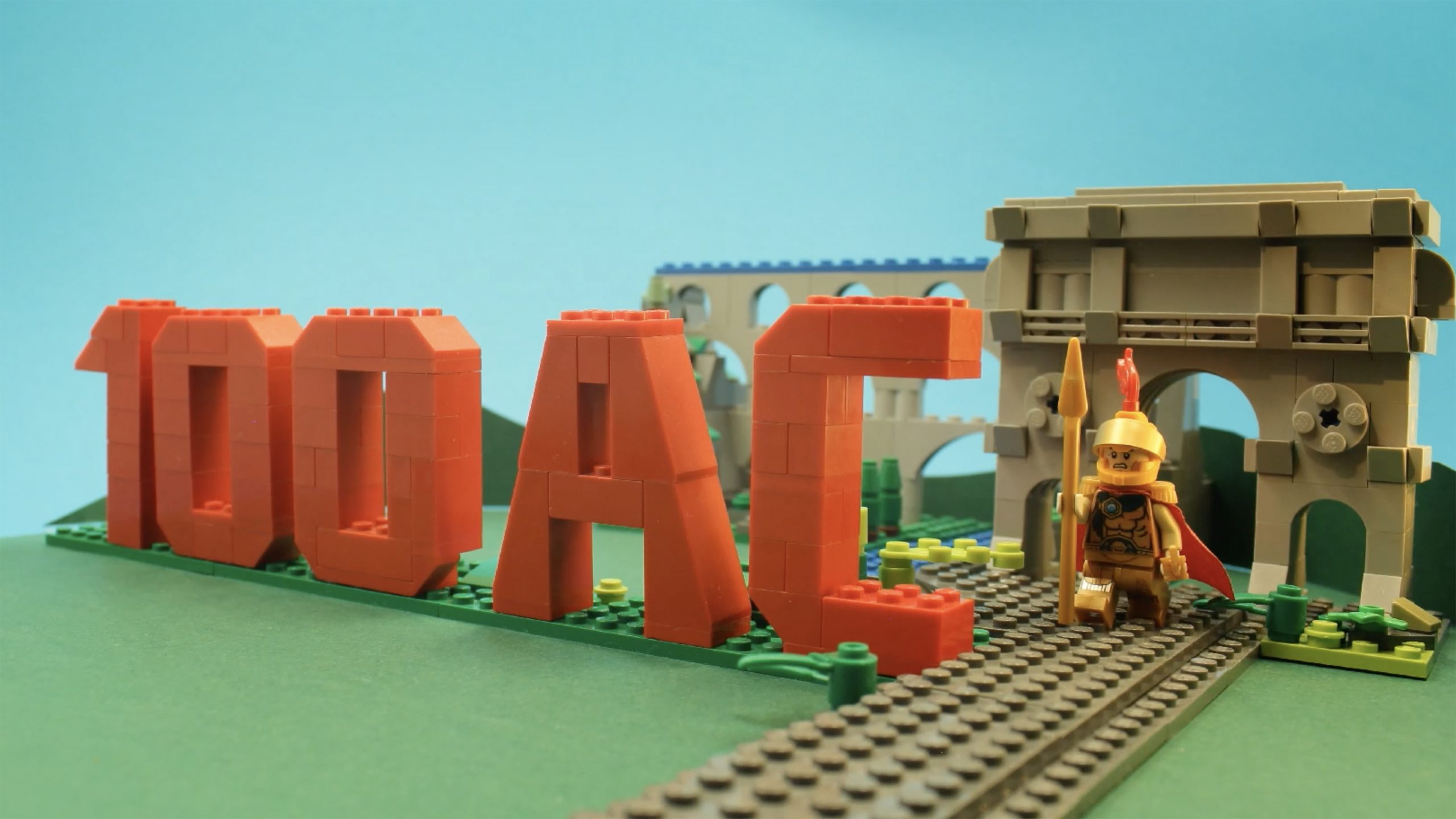 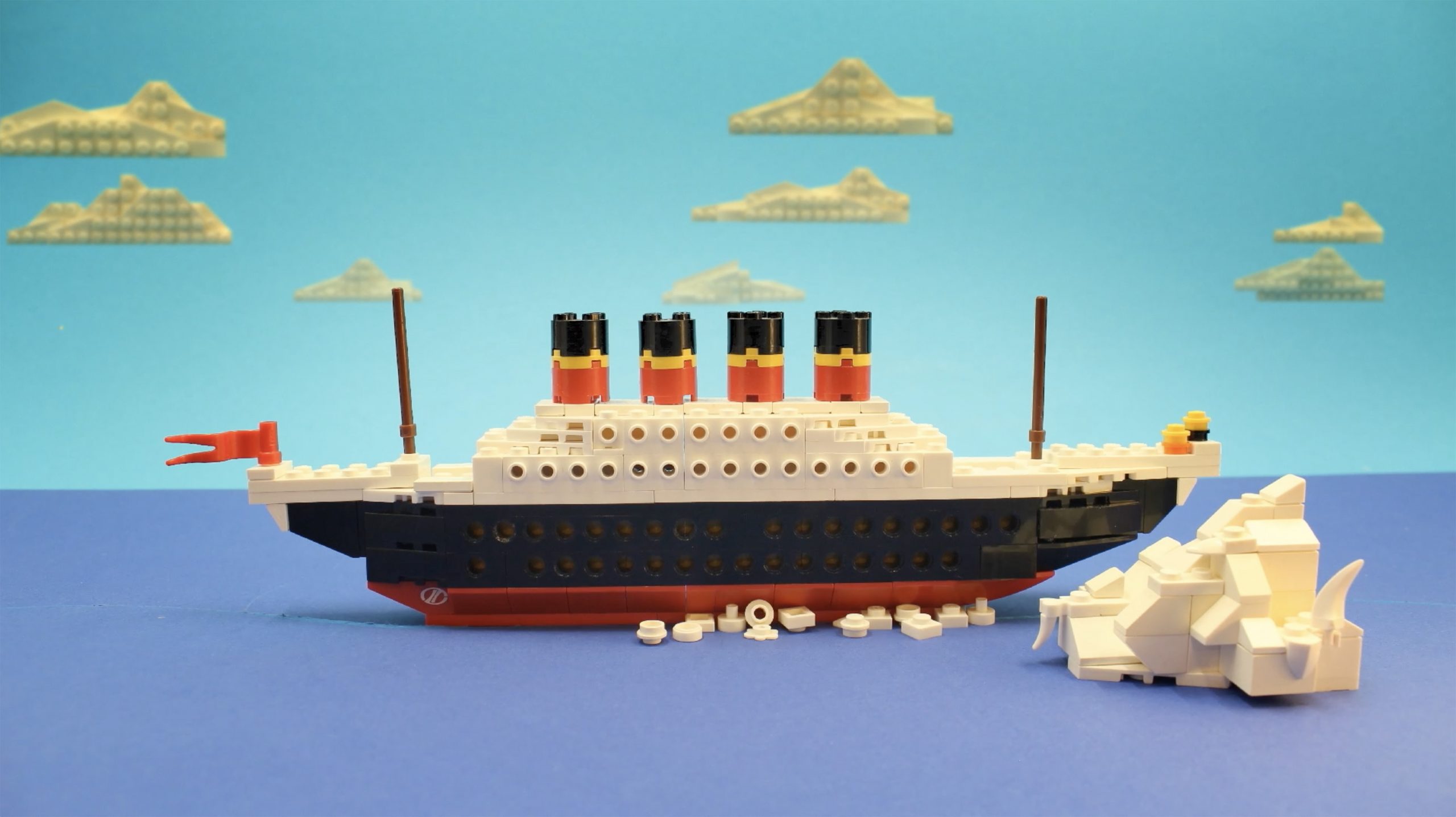 Animation film director Matthias Daenschel invites us on a journey through 10,000 years of human history. In a walk-in installation, the audience can watch on 13 displays selected scenes from the stopmotion film „A history of the world in 10,000 bricks“. The special feature: Each of the scenes is literally made up of the familiar small literally made up of the familiar little bricks. The artist started the project last year. The time for it gave him the lockdown and his sons the necessary building blocks.

In front of a bright blue sky, they form dates and famous buildings as the center of that time. The world around is in constant motion and tells of evolution and revolution. It is not a matter of historical accuracy. Rather are playful comments or allusions to what happened. Not all historical developments are depicted. The film follows its subjective world history. The selection of epochs and their reduction show the artist‘s view of the artist on the events, always with an eye for the particular. The contrast between historically significant scenes in squeaky-color building block optics, and the background music with powerful film music of the Babelsberg Filmorchester (composition: Max Knoth) lends the film an ironic, humorous note.

The partly iconic snapshots get their very own charm through the rich colors of the characters and the lightness with which Matthias Daenschel tells their little stories. Strolling through time and space almost automatically awakens memories of early childhood days. 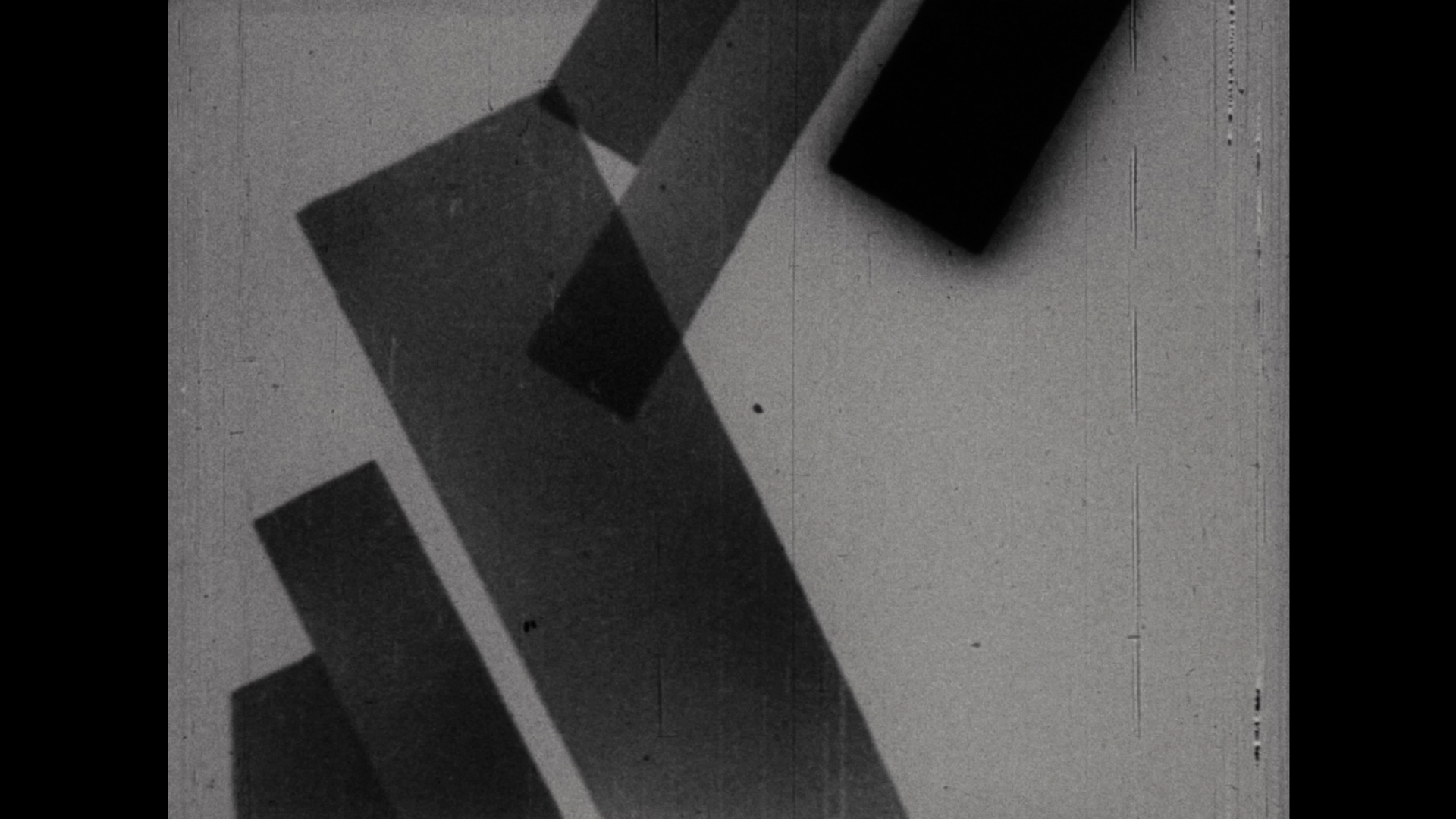 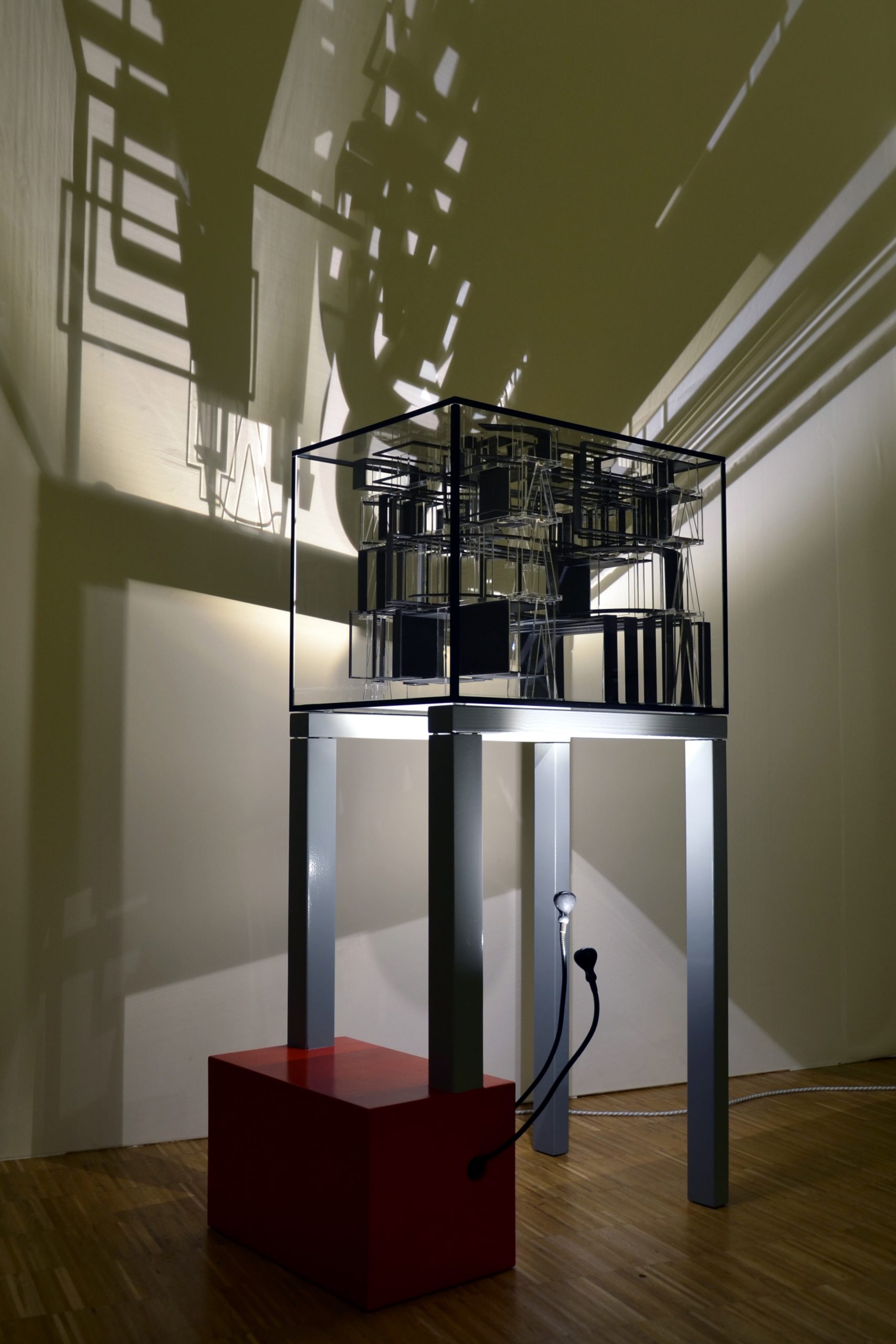 The work „Skulptur23“ by Gerald Schauder is created in an examination of the role picture „Rhythmus 23“ by the painter and film artist Hans Richter from 1923. The role picture served Hans Richter as a study for his films: It depicts the temporal sequence of different forms on paper side by side. In the same year, Hans Richter completed his black-and-white silent film of the same name.

Gerald Schauder has designed a sculpture based on the reel painting, which takes up the shapes and colors of the reel painting and reinterprets them. The result is a complex structure made of Plexiglas, wood and acrylic. The artist intertwines the forms in a compact shape. The transparency of the material allows a glimpse into their nested structures.

Similar to an analog film print, the sculpture serves as a projectable medium in an extended sense and is illuminated by light. Gerald Schauder uses two aligned light sources and casts shadow images of his sculpture onto the walls of the exhibition space. These shadow images freeze the sculpture for the viewer at an angle determined by the artist, reduce its spatiality and condense its forms onto a dark static surface. The sculpture becomes an image. Inevitably, a resemblance to the images of Hans Richter‘s black and white silent films emerges. But in contrast to the time-based medium of film, Gerald Schauder presents all forms simultaneously in space. Time as a unit of measurement loses its meaning.

We would like to thank the Deutsche Kinemathek and MASI (Museo d’arte della Svizzera italiana, Lugano, CH) for their kind cooperation. 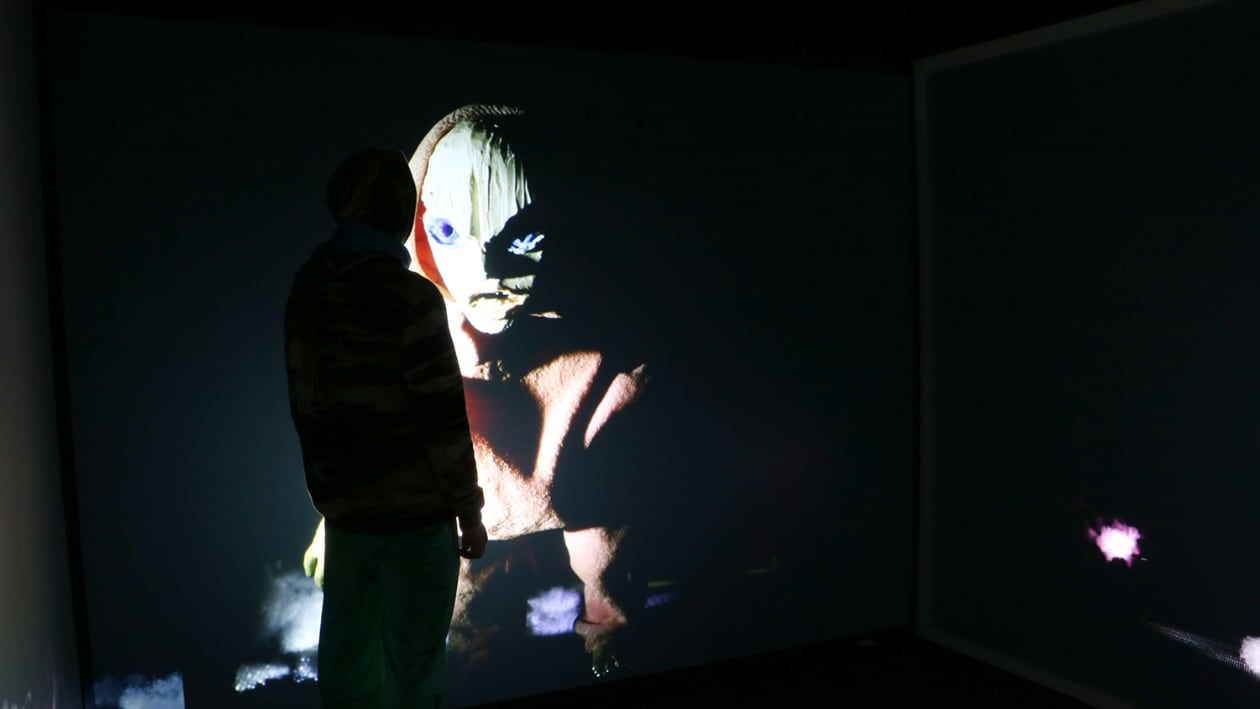 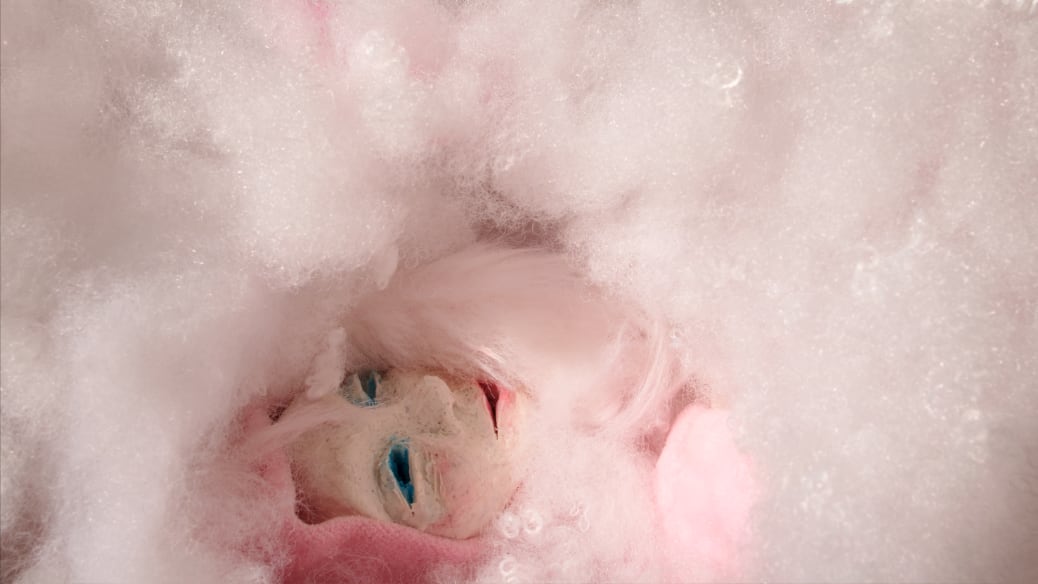 In Felicia Bergström‘s immersive 360-degree installation, visitors encounter a person made of plasticine – called Bunny by the artist – in a plush, pink hooded suit. With some distance and as if behind a glass wall, we as viewers can observe the figure moving around us on the four canvases, looking at us and addressing us. We are not secret observers, but are ourselves at the center of the action.

Involuntarily, a relationship with Bunny develops that we do not have to confirm with gestures or words. We can only stand silently in the face of her accusations and apologies. The randomness of the moment when we enter the installation space determines the condition in which we encounter the figure. Depending on the moment, we encounter monstrous rage or seemingly innocent playfulness.

But there is no beginning and no end in the cyclically arranged events. The viewer experiences how feelings are ignited, escalate, exhaust themselves and reignite. The artist gives us the opportunity to let these moments take effect on us at a safe distance.

We kindly invite you to the opening of the exhibition on Sunday, September 26 starting 11 am. It will take place in and around the exhibition venue Verwalterhaus. 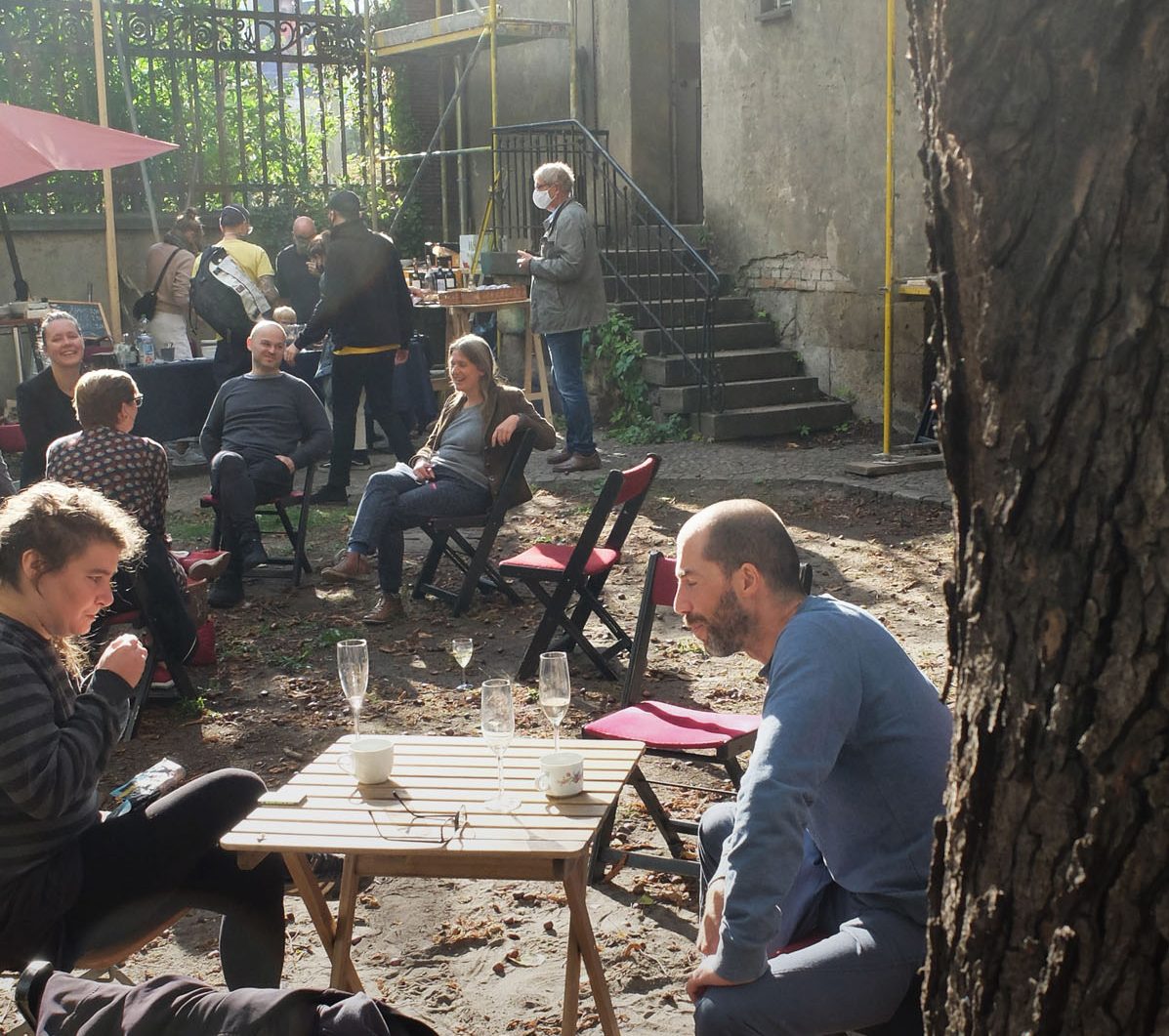 Traveling to the venue from the festival center we recommend U6 to Naturkundemuseum then switch to Tram M8 or M12 until Mollstraße/ Prenzlauer Allee. (approx. 30 Min.) 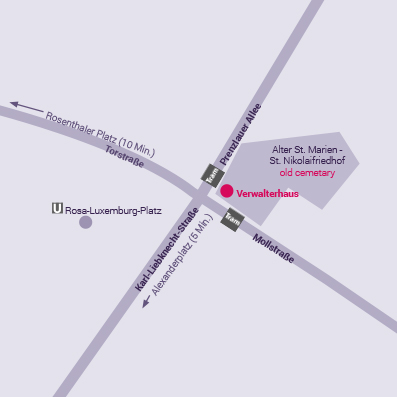 Restrictions due to the Pandemic

Due to the Corona Pandemic Regulations the number of visitors might be limited. Please prepare for longer waiting periods. It is obligatory to wear a protective mask while visiting the exhibition.